This is what my awesome friend Ashley’s kitchen looks like now: 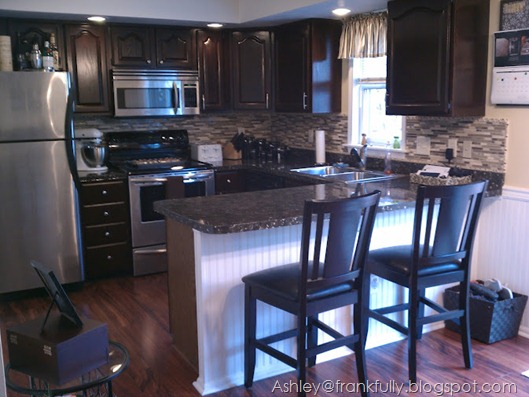 Isn’t it phenomenal? And the only new things she bought were the floors, which she had professionally done, and the tile backsplash, which she and her husband installed themselves.  The rest was total DIY.  She refinished her cabinets, painted her countertops, and of course, repainted the walls.

She’s been nice enough to share with us her faux-finishing technique for her counters. How awesome to paint your counters!

For me, summertime is home improvement season. Every year I am excited to start
a new project. About halfway through, I hate myself for starting a new project, but at
the end, I’m always glad I did it!

We bought our house in May of 2009. It was in great shape, but we wanted to put
our own touches on it. We did the usual quick fixes, like new carpets and paint. We
knew we wanted to tackle a couple of big projects, like the kitchen, but we put it off
for a couple years. Our kitchen looked like this when we moved in: 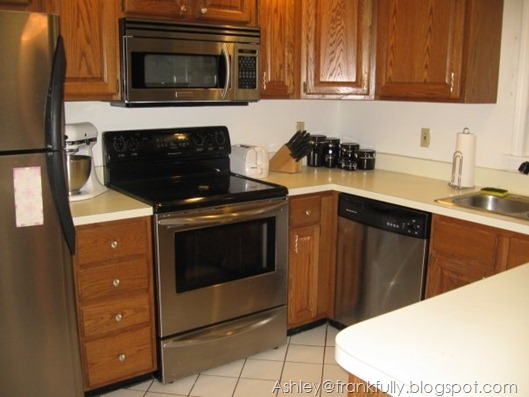 And this is what our attached dining area looked like: 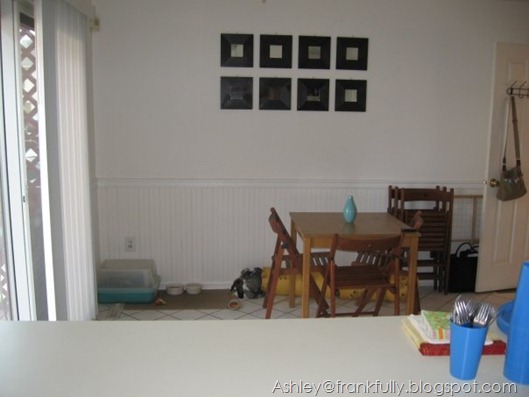 We were lucky enough to already have the expensive stuff, like stainless steel
appliances and cabinets that were in really good shape.

I’m a teacher, and a couple months later when I was having trouble finding a
summer job, I took on cabinet refinishing. I hand sanded and used gel stain and
polyurethane to refinish our cabinets, and then our kitchen looked like this: 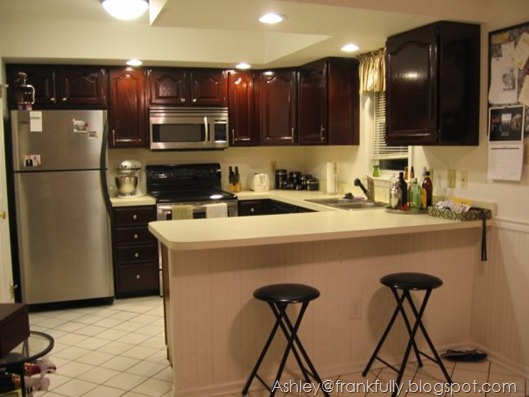 The next thing we did was to put in Pergo laminate floors. We liked the ceramic tiles
that were already there, but they were installed incorrectly, and many of them were
already cracked, with more threatening to crack at any time. We didn’t want to mess
with heavy appliances, so we paid someone to install our new floors.

This summer, I needed a new project.

Our white laminate countertops looked cheap next to our fabulous cabinets, so we
looked into replacing them. All of the estimates we got were outrageous, so I started
looking into other options.

I saw some guides to spray painting countertops, but those all looked like regular
laminate, and we wanted something a little fancier. I also found that Rust-Oleum
makes a countertop refinishing kit, but they didn’t offer the color we wanted.

I found this guide online, which wasn’t super specific, but gave me enough details to
get me started. Once I found out you could fake granite countertops, I had my mind
set on it!

It wasn’t a moment too soon, either, because my husband sat a hot pot on a pot
holder and burned a potholder shape into our counter. 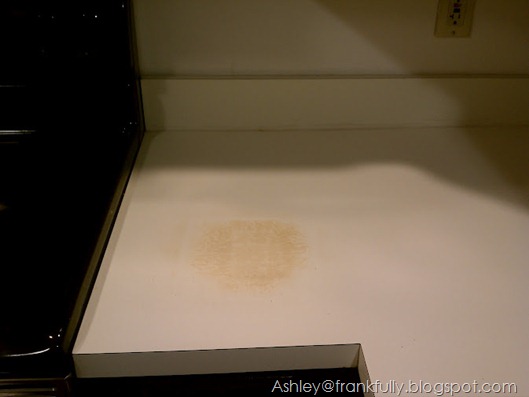 Of course it was in a place where I couldn’t easily cover it…So I got started!

First, I removed the sink (thank God for YouTube tutorials!!), cleaned and sanded
down the counters, then I masking-taped the edges. 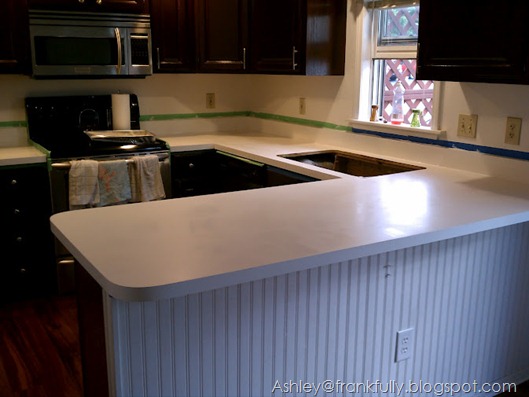 I gathered my materials: 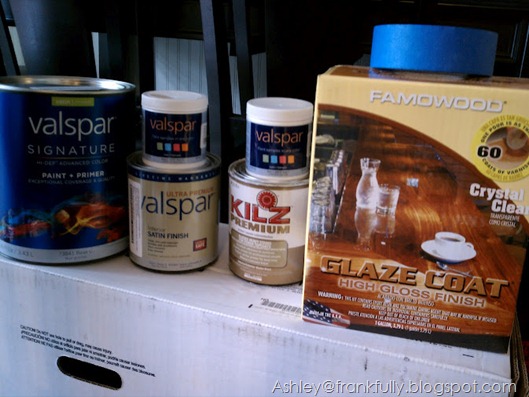 I bought Kilz Primer and Valspar paints. I overestimated the amount I needed. I
could have gone with a small can of the base color, and samples of the other three.
I decided on Glaze Coat because it is waterproof and heat-resistant, which seemed
perfect for a kitchen counter!

I rolled on the primer, and then rolled on the base coat with a foam roller. It looks
green in the photos, but it’s actually a shade of brown. 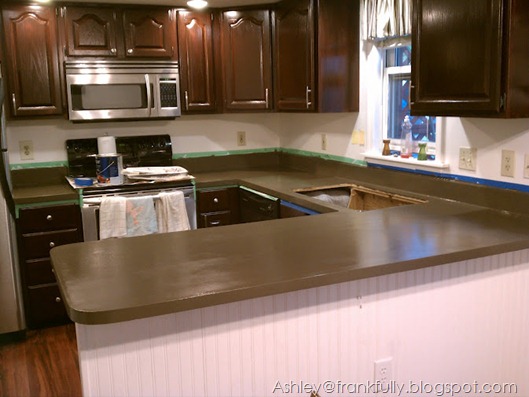 While I waited for the base coat to dry, I practiced on an old cardboard box to get a
feel for the amount of sponging I should do. This also helped me see the shape of the
sponge, so I could anticipate any recurring shape patterns made by the sponge, in
order to plan and make them less obvious. 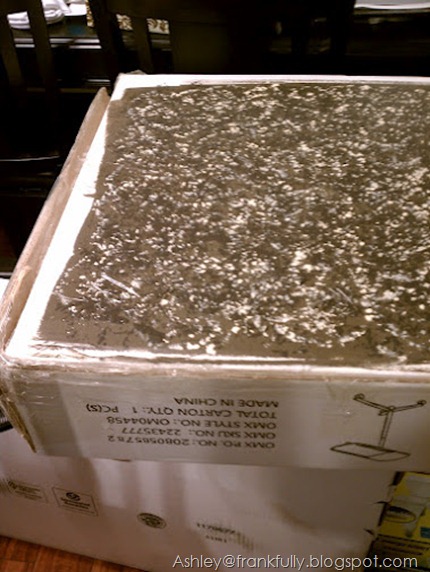 I used a natural sea sponge. I cut it in two so I only had to buy one. I found that it
was good to layer the colors – I did a layer of the darkest brown, then a sparse layer
of an almond color. Then I went back over with each layer twice. This really helped
give it a more natural, in-depth look so the layers weren’t obvious.

As a final touch, I used white as a small accent. I had a small paintbrush (like what
we used in art class in elementary school) and used that to flick paint onto the
counter. A toothbrush would probably work too! I occasionally used the paintbrush
like I used the sponge, and just made a splotch on the countertop. Because I had done a practice run, I had a good idea of how dense to make my layers each time,
since I would be going over them again and again.

Here is the painted countertop! 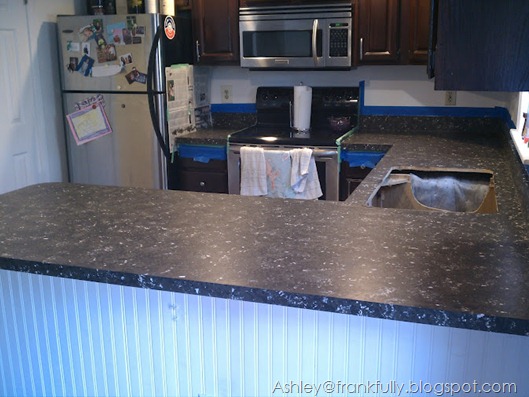 The next step was the scariest for me – putting the glaze on! It’s basically a two-part
epoxy with a time limit for applying it. Before I got the glaze out, I taped everything
off. I used several layers of newspaper on the floor for drips. It was mostly ok, but it
would have been better to use a plastic dropcloth, or maybe even just trash bags.
The epoxy soaked through to the floor in a couple of places. (It mostly scraped off
though – I was lucky!)

I also made the mistake of not moving the stove out for the first coat! I ended
up epoxying the stove to the counter top. We had to use a putty knife to cut it
loose…oops! My final mistake to learn from is to turn the air conditioning off,
no matter what kind of insane heat wave you are having! Not only is it good for
ventilation, but it also keeps tiny dust particles from blowing up and landing in your
glaze coat.

I followed the Glaze Coat directions exactly, and it turned out pretty well. I used a
foam brush to spread it on to the vertical surfaces, which works, but it is important
not to get too much on, or there will be drip marks, which are really noticeable with
Glaze Coat.

On my first coat, I had some trouble getting the glaze to spread all the way to the
edges. During my second coat, I came up with this brilliant idea! 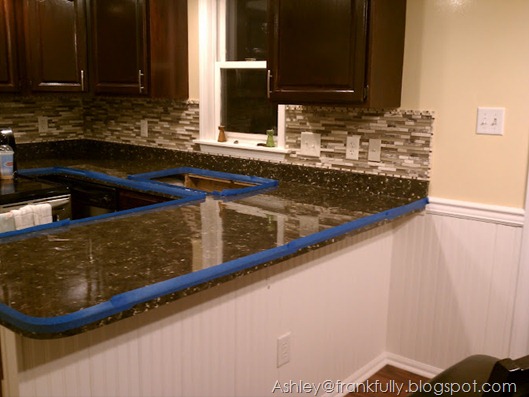 I used the masking tape to build a wall (make sure it’s on there with no ripples for
the epoxy to drip through!). Then I was free to pour out the glaze all the way to the
edges. I used a straight trowel to spread it evenly. Watch out for dry spots! I had
some spots that the glaze just skipped over for some reason. You have to catch these
spots and respread them before the glaze dries, or you’ll have to do a second coat
like I did. Having to do a second coat was not only more expensive, but way more
stressful too! In the picture above, you can see the midnight slushie my husband and
I had to go get in order to escape our ripped-apart kitchen! 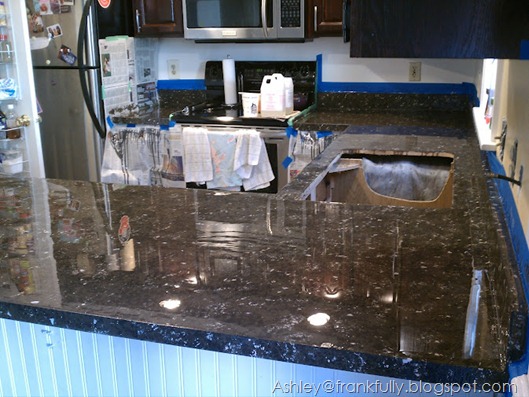 After about an hour of drying time, I was able to pull the masking tape off the sides
and it was stable enough that it didn’t drip or droop over the sides.
Then the glaze has to dry for 72 hours. It will be dry to the touch after the first 24
hours, but don’t put anything on your counter! We spent this time painting our
kitchen and dining area bright yellow. During this time, I also decided that we were
just going to go for it and install a tile backsplash, since the whole room was already
in a shambles. 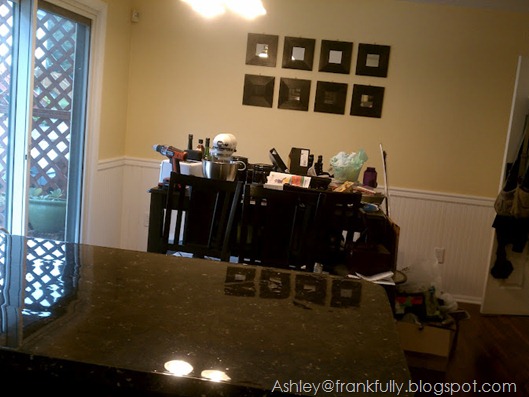 We did the tiling while the countertop was in its last few hours of drying, so we
could lean on the counter a little bit without worrying that we were leaving marks in
it. 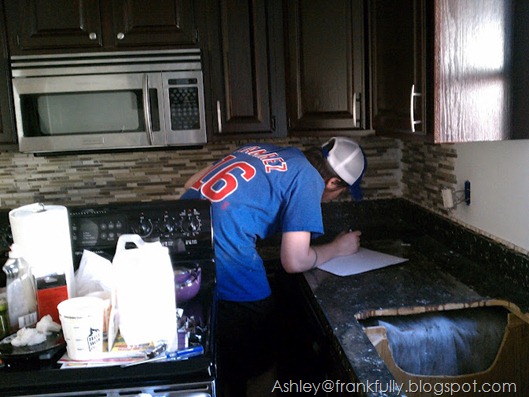 After some cleanup, we were finally done! 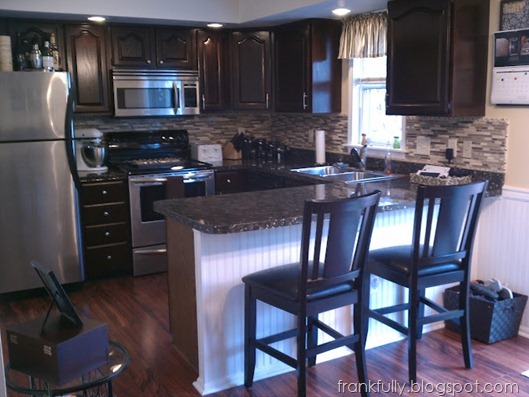 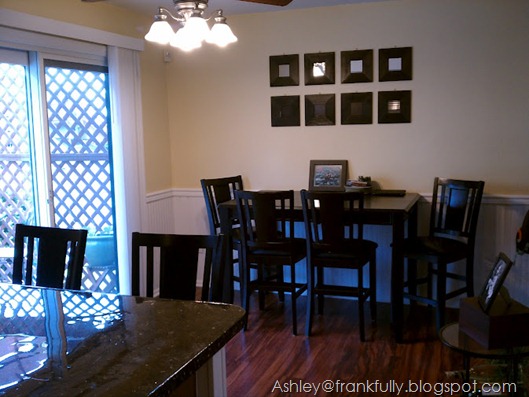 What a difference a DIY makes! 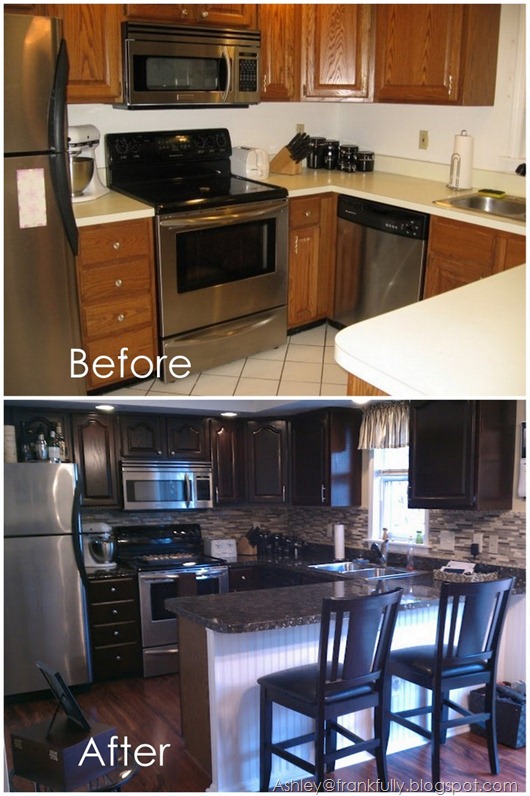 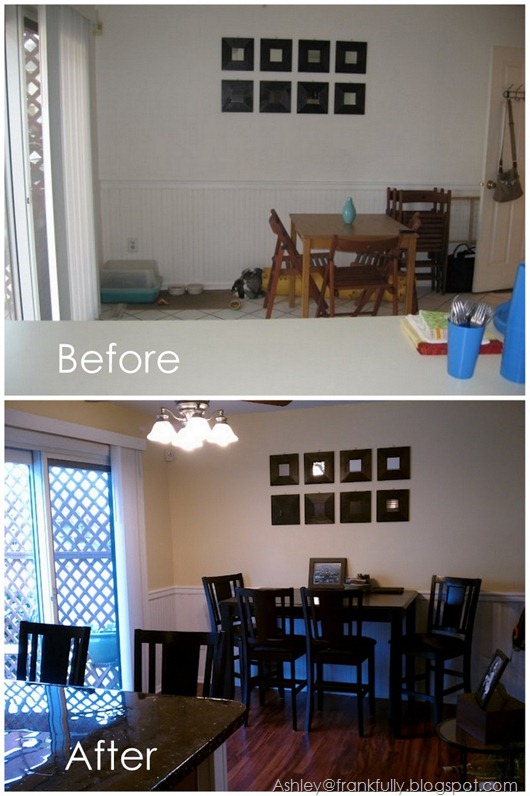 The counter has survived several parties and lots of food preparation. There are no
marks on it! The only thing to get used to is that using too wet of a rag to clean the
counter sometimes leaves water spots. Also, things don’t slide across the counter
anymore – they kind of just stop, which is harder to get used to that you would
think!

The end result is a fancy kitchen for a fraction of the price of a professional
renovation! And I even have the satisfaction of knowing that I did (most of) it
myself!

Thanks again for sharing all your photos and advice, Ashley!!

Posted by Victoria @ Frankfully at 9:45 AM