My musings on POOPs and weeds began this weekend, when I really began my war on burdock.

Since we’ve moved into this house, we’ve been plagued by these thisle-y sticker-y things that the dogs bring into our house on their coats. (I couldn’t find any to photograph outside, so here’s a picture from a website I found in my research.)

The dogs would just be covered in clumps of these. Especially Shadow, because his hair is longer. And my cousin’s dog would need to get them cut out of her long hair when she’d come over.  And we’d have clumps of them on the porch and on our rugs…and sometimes the clumps would look like a dead mouse and I’d freak out.

I had to figure out where they were coming from and rid our yard of them.

Also, separately, since I am trying to cultivate wildflowers (and pretty weeds) in our yard, I’ve been trying to sort of research what’s naturally growing here, so I can decide if it gets to stay or has to go.

Well, we have a ton of this stuff in our yard that Grandpa calls wild rhubarb. 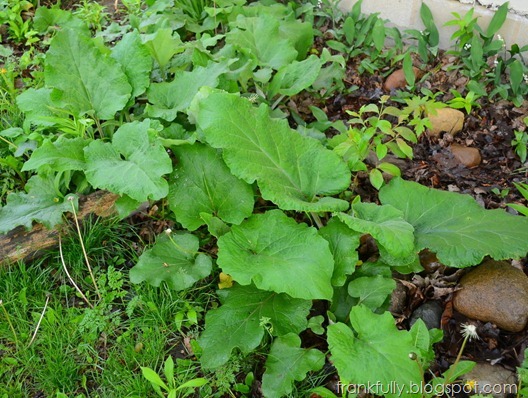 So, I Googled “wild rhubarb” and eventually came upon sites like this and this that told me that wild rhubarb is really burdock.  And burdock is the source of those stupid stickers!!

I already knew that burdock is pretty hard to kill with weed killers (since I used Round Up to clear the areas for the wildflower garden), so I was looking for a way to get rid of it.  The second site I listed started to tell me, and this site told me a little more.  Burdock is biennial. So the first year, it just sprouts leaves (like the ones shown above) and the second year, it flowers then goes to seed and dies. So if you can attack it while it’s flowering but before it’s gone to seed (which are the brown stickers), you can (hopefully) kill it.

So I let it grow this year, and began attacking over the weekend. 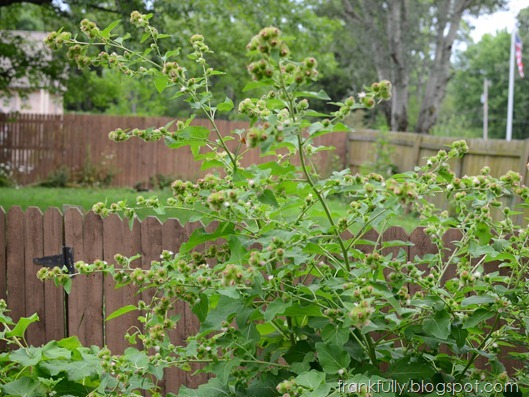 Some of these burdock stalks got TALL! Higher than our 4-foot fence!

Here are the “blooms” up close. 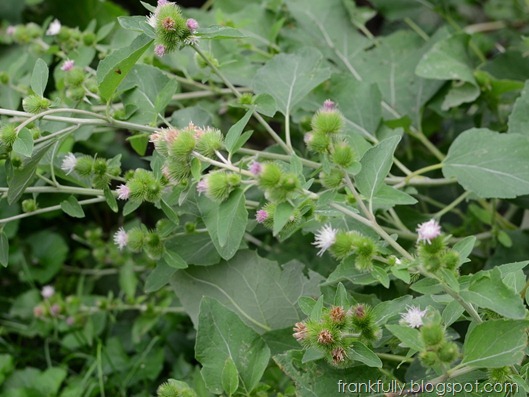 This article says to wait until the blooms just start to turn purple. I hope I waited long enough. But I definitely didn’t want to wait too long and lose my chance!

Here are some of my piles of burdock. 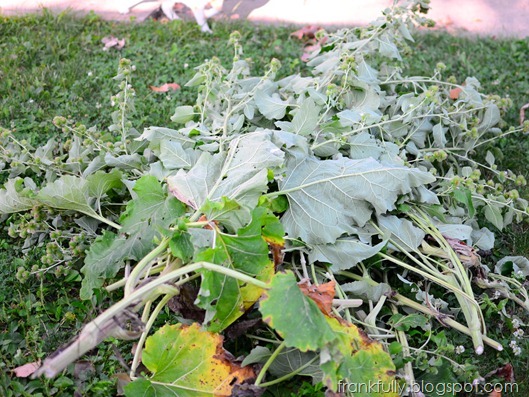 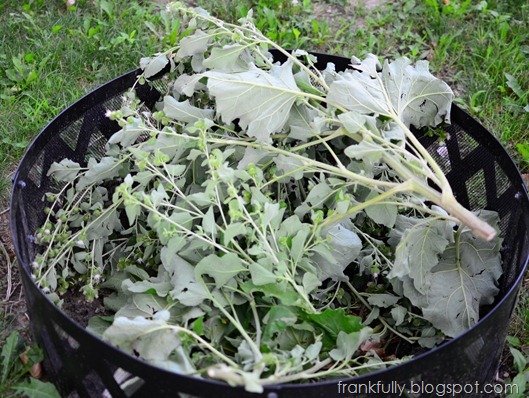 Because burdock spreads only by seed, a few years of attacking the plants like this should hopefully remove (or at least significantly reduce) the burdock from my life and my yard. I know that it spreads by seed, because you can almost see the dogs’ paths throughout the yard covered in little burdock plants.  (And as I continually discover more burdock, I shake my fist at it and yell “Burdock!!” in my old man voice, as if I were yelling at those darn kids to keep off my lawn.)  :)

Anyway, while I was sweating away, trying to remove these plants, I thought to myself how in my research about how to rid myself of burdock, I came across so many articles, like this one, about the beneficial uses of burdock.  You can cook, eat, bake with, and make tea out of almost every part of the plant, from the roots, to the stalks, to the blooms. I was learning about its medicinal uses as well as its nutritional benefits.  You can actually buy burdock seeds online.

And here I am trying to get rid of it. For me, it is a POOP. It’s a Plant Out Of Place.  People think I’m nuts for keeping blackberries. I think people are nuts for growing burdock. But again, one woman’s weed is another woman’s delicious treat.

So, in an effort to remove my POOPs, I will be sweating all summer as I continue my war on burdock.