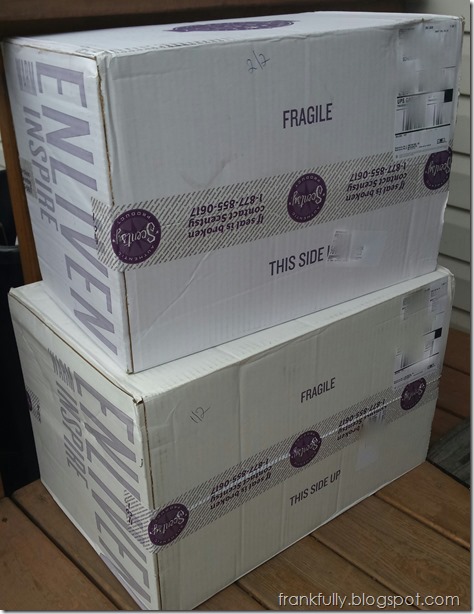 I know I said that is try not to spam this blog with Scentsy, but I can't help it! (It's not spam, yet, is it?) I love it and it's something new in my life! I love scheming for the best deals - and Scentsy can be a dream for that: combine and save packages, hostess rewards, monthly specials, oh my!
(I want to get my act together to tell you all my Shutterfly deal-scheming, too! I have a lot of photo books that still need to be made and bought with coupons. My next Tuesday should be my love of coupons!)(Ok, I'm officially babbling.)
Anyway, my first few Scentsy basket parties have been pretty successful...it's like Christmas here! Look at all this great stuff that my friends/family/customers got! 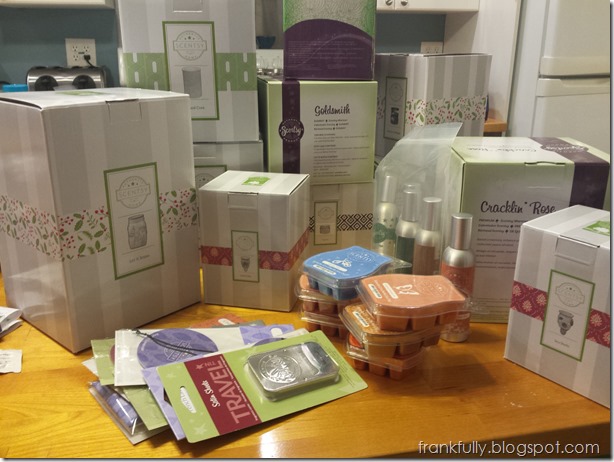 I got a bottle of the Vanilla Cinnamon Clove Natural Oil to try! Exciting! 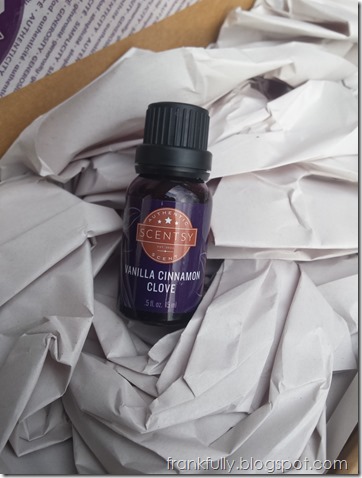 And of course, I immediately plugged in my new Let it Snow warmer – the November Warmer of the Month. This pretty warmer is part of why I joined Scentsy in the first place!! And let me tell you, so worth it! It’s so gorgeous in real life! I love that it is wintery, not just Christmas-y, so I don’t have to feel bad about using it all season ;) 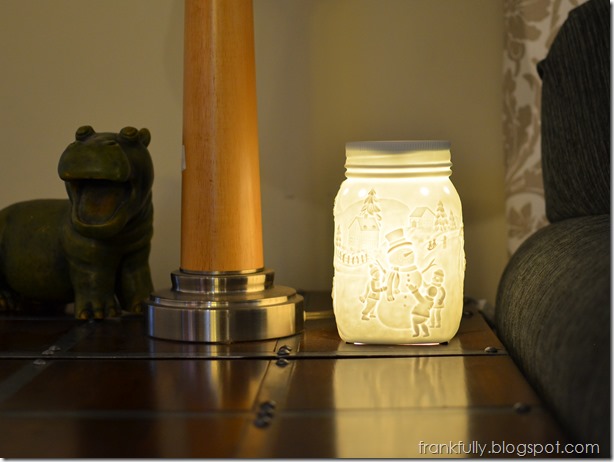 Such an exciting first order! This is fun! :) I would have been posting about some cute Scentsy stuff whether I had joined or not…I can’t help it, I just love chatting about things I love! But I promise to keep it to cute stuff :) :) :)
(This was actually last week, but my lucky Friday the 13th is to be posting it today! (I got another fun Scentsy box today!) Anything fun happen to you on this “spooky” day?)
Posted by Victoria @ Frankfully at 10:24 AM No comments:

Email ThisBlogThis!Share to TwitterShare to FacebookShare to Pinterest
Labels: scentsy

As we’re coming up on his second birthday party, I thought I’d finally get around to posting a few pictures from Porcupine’s first birthday party. We had a blast and everything turned out just the way I wanted it to! (Except all the snow on the ground, but what can you do when you have a baby in February in Indiana!)

The theme was kind-of Alphabet-y. Everything I do is Alphabet-y (I still have to post baby shower alphabet things! Another thing to add to the to-do list!) I found inspiration for an Alphabet-y invitation from this blog. 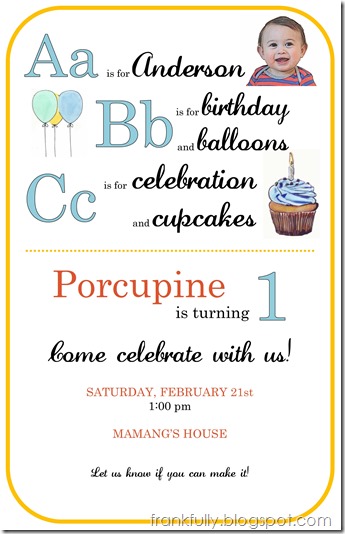 (Fonts are Century Schoolbook and LaurenScript. I used the “Pencil Sketch” feature on Picasa to make Porcupine’s picture seem schoolbook-y. Then I printed them on cardstock – 2 to a page.)

I’d been pinning all kinds of cute desserts forever, so I just made a bunch! Cupcakes with rainbows, goldfish, teddies, “balloons”, and of course As, Bs, and Cs! 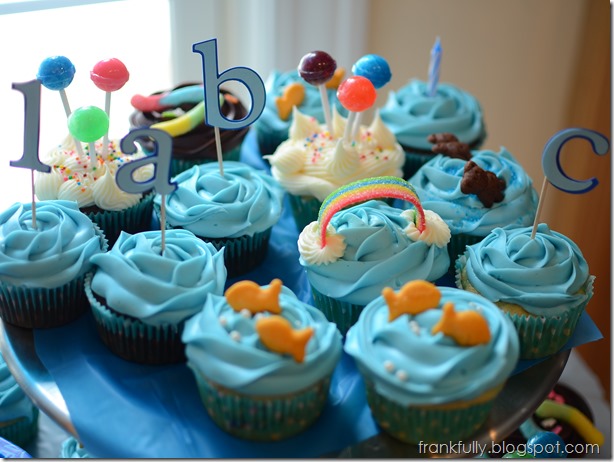 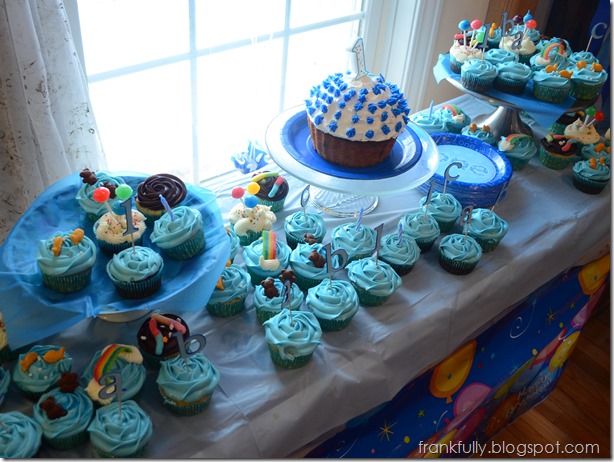 My mother-in-law made Porcupine a giant cupcake to smash in to! 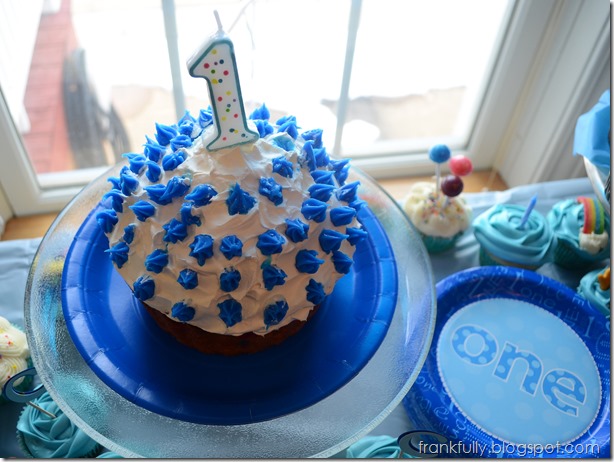 I knew I wanted some kind of cool “backdrop” (again, I owe you a baby shower post, because there, we did balloons, kind of like this.) made of balloons or streamers or something. Then, on the same blog where I found the invitation inspiration, I found a cool “Happy Birthday” sign inspiration. 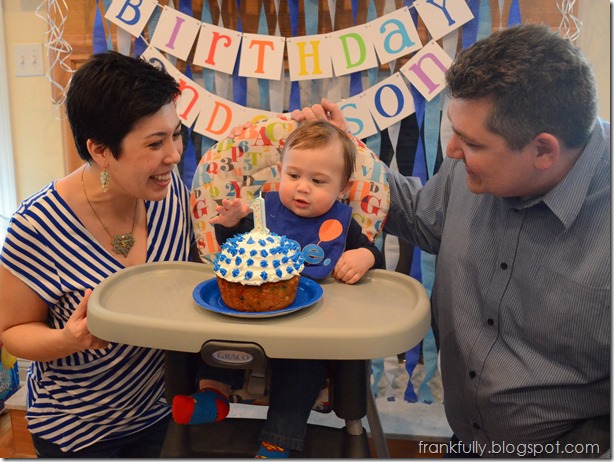 I cut the letters out on my Cricut using the font from the “A Child’s Year” cartridge.

Our house was full of family and fun, and I couldn’t have asked for a better party. 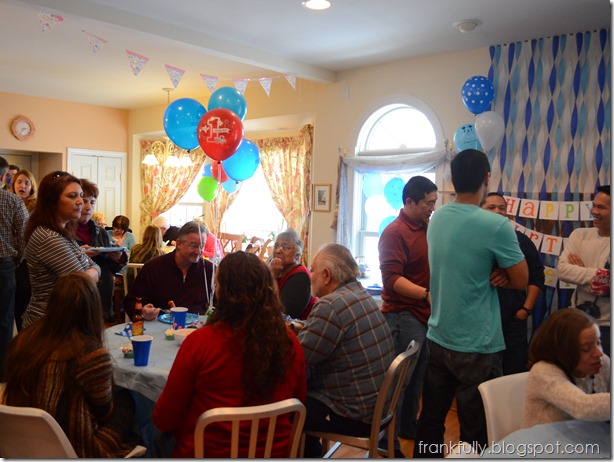 I think Porcupine had a great time, too…and he loved his cake! 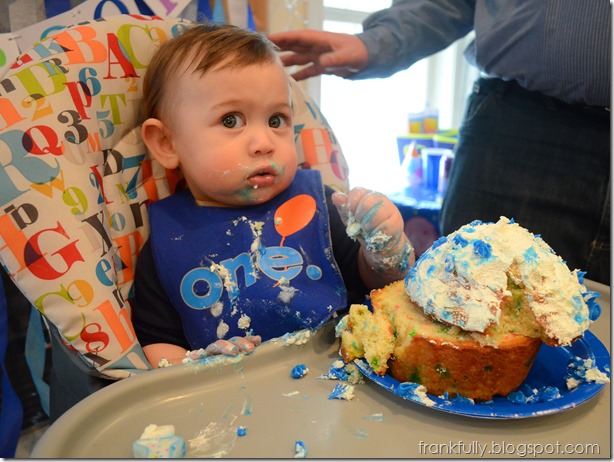 Hopefully, I’ll post pictures from his second birthday in a more timely manner! And I’ll get to work on a baby shower post, pronto!

Posted by Victoria @ Frankfully at 9:14 AM No comments:

I have probably said this before, but I don't love drywall finishing work (and I am certainly not a pro at it!), but I always get stuck doing it because I have more patience than Brian.

I recently found this joint tape and have only mudded with it a few times, but I think I really like it. I can't yet speak to its longevity, but it embeds easily into the mud and seems easy to cover. I don't like that the fiberglass feels like it gets in your hands like insulation does, but if I was using it a lot, I should probably wear gloves. 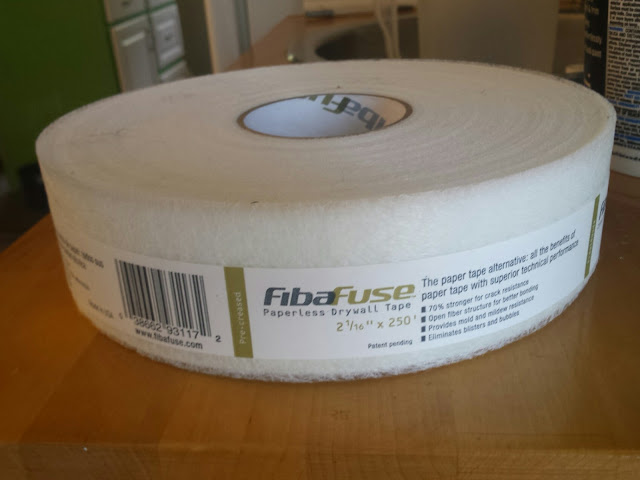 Has anyone else used it? Does anyone actually like mudding drywall?
Posted by Victoria @ Frankfully at 9:00 AM No comments: 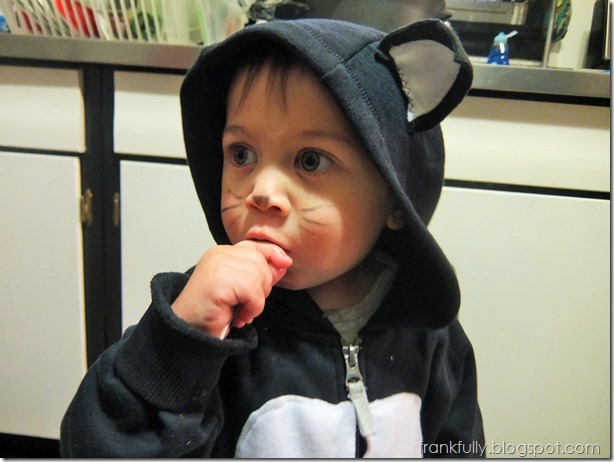 He loves the cats at his grandma’s house so much! Here he is with his costume inspiration: 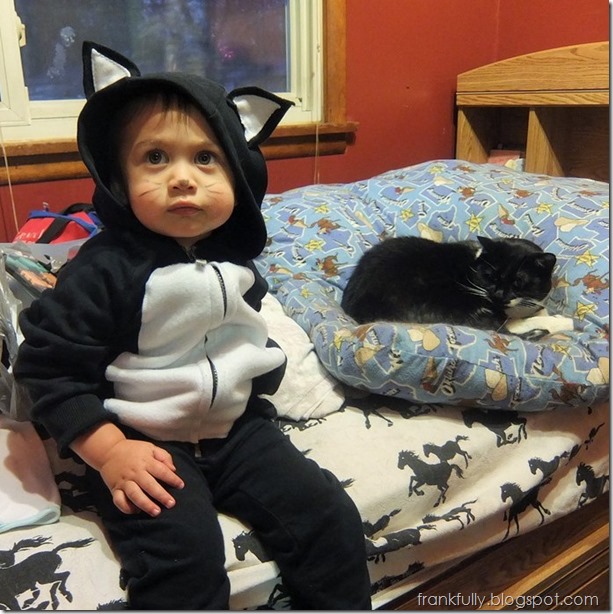 Ha! Aren’t they cute?
He had an awesome time trick-or-treating for the first time :) (on his second Halloween!) 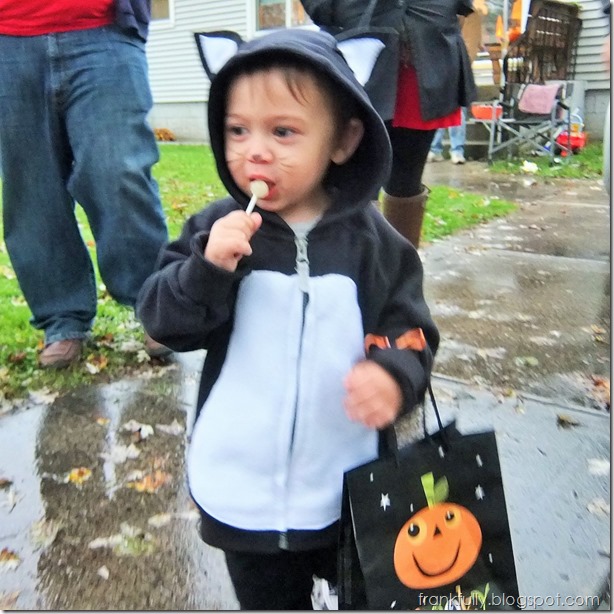 (He was all about the Dum-Dum suckers!)
Happy Halloween!
Posted by Victoria @ Frankfully at 1:39 PM No comments: 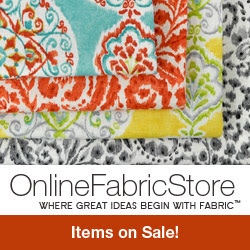 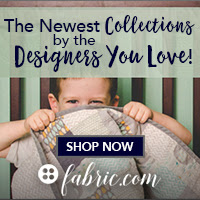